Perhaps not everyone knows that when pasta became a very popular dish in the canteens, “nobles and princely Italians” refused to eat it. The reason? Because it was a dish eaten using your hands. 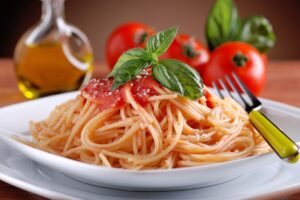 It was only around 1800 that, thanks to an enterprising chamberlain of King Ferdinand II’s court, a certain Gennaro Spadaccini, and his brilliant idea of using a tool with 4 short tips (the grandmother of the fork), that Pasta was also served in lunches in courts throughout Italy and from there in courts around the world.

The first historical indication of pasta dates back to the Greek civilization (the “laganon”). However, it is certain that the Romans were the first to speak of “lagane”, similar to today’s lasagna. Pasta as we understand it today, however, is thought to have different origins. It was discovered that pasta was born between the fall of the Roman Empire and the advent of the Arabs, in Sicily! 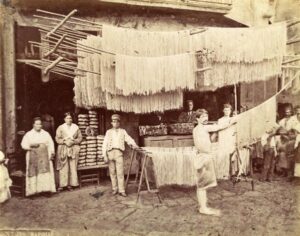 But where? To answer this question we must disturb the Arab geographer Edrisi, who in 1154 in his work “Kitab-Rugiar” (Book of Roger), describing an area defined as “to the right of terms Imerese, in the place of TRABIA”: Edrisi said that there they produced vermicelli called “itriya” (that is a kind of very thin spaghetti) that could supply all the towns up to Calabria! If the Arabs already knew these Itriyas, it is true that it was the change of technique and ingredients used by the Sicilians that led to a new product, spaghetti.

The first pasta shape was Macaroni, whose etymology is thought to derive from the Arabic “mu-karana (tun)” which means to put in parallel. 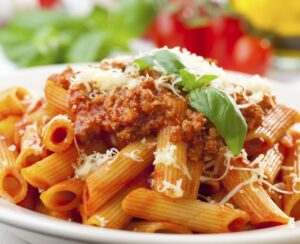 “Rancia e ciura” from Chiusa, is not a bad word but the name of an exclusive sfincione from Chiusa Sclafani. What is sfincione? A particular type of pasta similar to pizza dough, seasoned with tomato sauce, onion, anchovies, cheese – strictly grated caciocavallo -; this is the Palermo recipe, there are also different variations according to tastes and locations, in particular the “rancia e ciura”, literally orange and flowers, is a simpler dough in flavored white and with anchovies.

Don’t miss other news on our site. Sign up for our newsletter to stay updated on all the unforgettable experiences to live in Sicily!

If your mouth is watering, all you can do is come here to our beautiful island to taste a delicious dish of pasta (better if spaghetti) with tomato sauce! You will not regret it!