From Palm Sunday to Easter Monday, Easter in Sicily is a whole series of traditions, some of which are to be considered not only religious rituals but the real cultural and artistic events.

Generally the Procession is the common ritual of all the places in Sicily, which is according to the Christian religion deliverance from the devil, so the rebirth of life and the triumph of good over evil.

Each city later interweaving of their folk tradition with the legacy of the prevailing domination has created different celebrations and often characterized by a high emotional involvement, to be a real attraction known for numerous tourists who flock in main streets to admire the theatrical authenticity of the various steps of the Easter season.

Characteristic is the intense and active popular participation in Holy Week, religious representations are strongly felt by the faithful to the point of identification with the ceremony with strong pathos and become real protagonists of the ritual. Very long Processions wind through the streets which hosts orchestra parades, illuminations, fireworks and typical Easter sweet tasting. 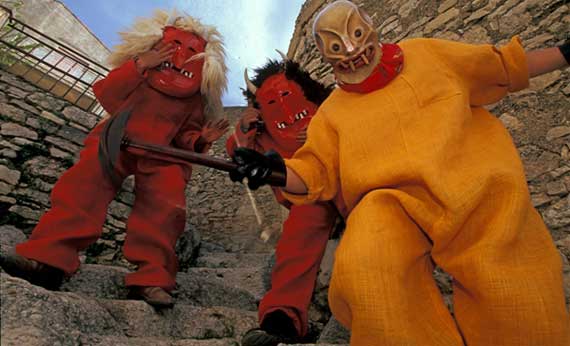 Without doubt one of the most spectacular festivals that runs along the border between the sacred and the profane, and warms the hearts of people with ancient rites is “The Dance of the Devils” in Prizzi (PA), the feast of the most characteristic of the Easter in Sicily that it made the small town in the province of Palermo famous throughout the world. In the magical spectacle of “u Ballo dei Diavoli ” where faith and folklore are intimately fused, the dramatic elements stem from mute representations that allow to the human spirit to participate to clash between Christianity and paganism, the spring and winter, light and darkness, life and death. At the stage performance is accompanied by a gastronomic event in fact along  streets are dealt “cannatedd“, a typical Easter sweet pastry and also hard boiled egg.

Staying in the province of Palermo we can not lose the Albanian Easter in Sicily (Pashkët Arbëreshe nė Sicili). In fact immersed in the atmosphere of co-existence between different ethnic groups, in Piana degli Albanesi, Contessa Entellina, S. Cristina Gela, Mezzojuso and Palazzo Adriano Easter rites for over 500 years they are preserved jealously. Clear is the strong link with the ancient belonging to the Albanian ethnicity and tradition, perpetuated in the life of every day, in religious rituals and language. 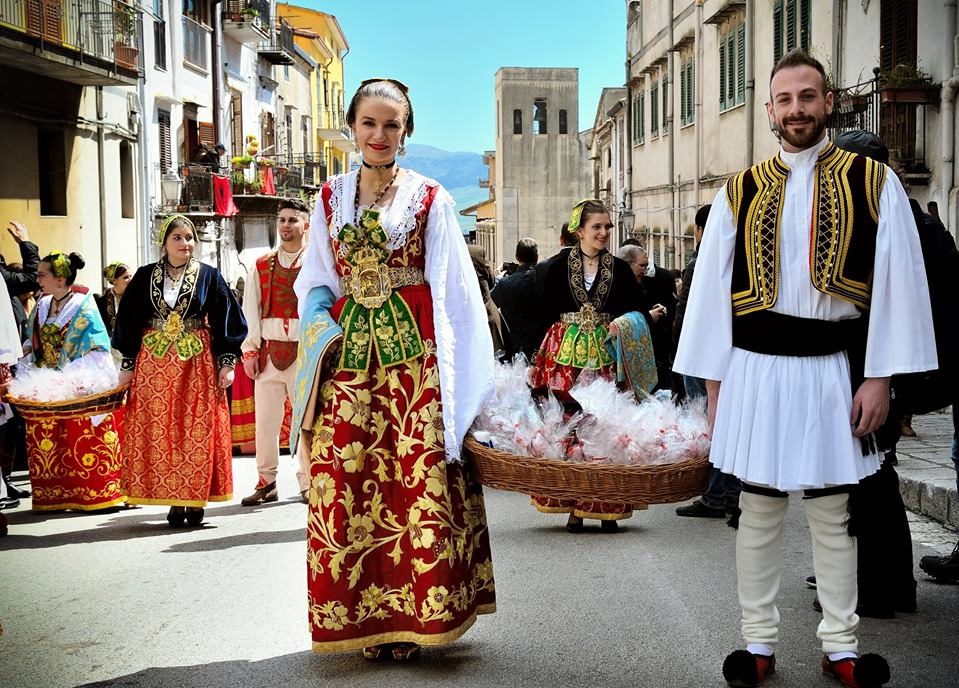 Inhabitants of Piana degli Albanesi, thanks to their tenacity and their own cultural and religious institutions, over the centuries maintained unchanged their identity and their cultural roots such as the customs, traditions, the characteristic richly embroidered women’s costumes, language Albanian and Byzantine Rite. The most awaited moment of every believer is definitely the rites of Holy Thursday, in this day is done the washing of the feet  for the purification: a highly evocative moment. Furthermore as in the province of Palermo the typical sweet is represented by bread with boiled eggs; particularly in this area is the red color they are painted eggs.

But you only move to Agrigento and some traditions will be changed, in fact this year in Favara (AG) will host the XXI Edition of the “Festival dell’Agnello Pasquale” (Paschal Lamb), from 10 to 16 April 2017. The event is held annually during the Easter period, and it is dedicated to the typical sweet stuffed with mandola’s flour, in the shape of lamb. Inside the rooms of the Castle Chiaramonte, visitors can taste the sweet typical of the city of Favara. The Agnello Pasquale was included in the “paniere M.I.D.A” that collects the best products of our land and all prepared.  It’s a festival that grows and attracts visitors, tourists and operators of information and showcasing in addition to the typical dessert even the monumental heritage of the city.

In the province of Agrigento not to be missed is the traditional exhibition of “Archi di Pasqua“, in San Biagio Platani (AG), immersed in an atmosphere of art, music and cultural events. This rite that was born from the cult of the Virgin Mary and Christ, has its roots in the XVIII century, even when the country did not count one thousand inhabitants. In this tradition we owe the birth of the two brotherhoods, Madunnara and Signurara, that passionately renew every year this wonderful event. Between the two fraternities there is a lively and exciting competition, which ends on Saturday night, when each fraternity organizes the part of the course which it deserves. At San Biagio Platani it was made in honor of this tradition the museum “Archi di Pasqua”, created with the aim of preserving the pieces of each edition Arches.

The Easter season is one of the most beautiful times to visit Enna. Here the procession is a ritual that accompanies the entire Holy Week and passes through the main monuments of the city, from the Sanctuary of Papardura, the Church of San Sebastiano until reaching the Church of San Leonardo, places where you gather all the brotherhoods. More than two thousand brotherhoods, rigorously established order and in absolute silence and sadness, precede Vare of the dead Christ and the Addolorata, thus starting the long funeral procession that will travel almost the entire city.

A few kilometers away is Aidone (EN) whose feast protagonists are called “Santun”, hollow statues of considerable size that reproduce the twelve apostles. During the Easter Sunday frantic run between the main square Filippo Cordova and in the streets of the city in search of the risen Christ, until, after finding it, bring him back from Madonna. In addition it also celebrates a moment of conviviality and solidarity that has little to do with religion but converges in the interweaving of local traditions, in fact, they are distributed “giamelle” and typical wine biscuits in memory of the dead brothers. These cakes will also share with the widows of the country. 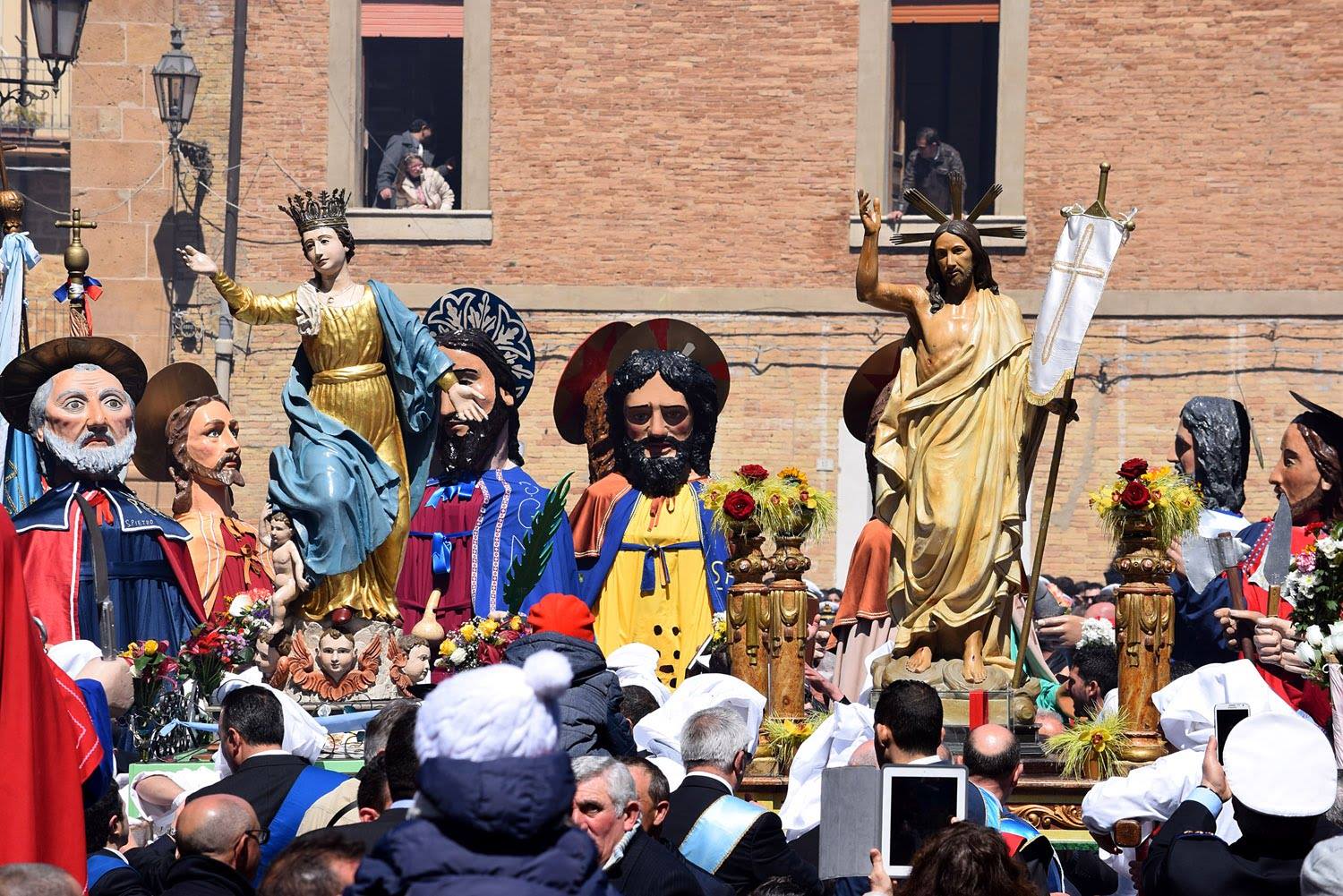 And for those less interested in religious tradition Easter in Terrasini (PA) it is one of a kind. Nothing churches, monks, angels or demons in Terrasini you get married, or at least hopefully. In fact it’s called “Festa di li Schietti“, which each year attracts thousands of enthusiastic visitors. This event, which involves the whole town, and the real protagonist is a tree. It’s a test of dexterity with which the young man single (bachelor) demonstrates his ability and physical strength in order to impress the girl of his dreams and get to win her heart. To do this he will raise an orange tree of the weight of 50/55 Kg under the balcony girlfriend, “zita“, keeping it raised and in equilibrium with one hand, it will spin much time as possible, demonstrating its strength and his manhood. 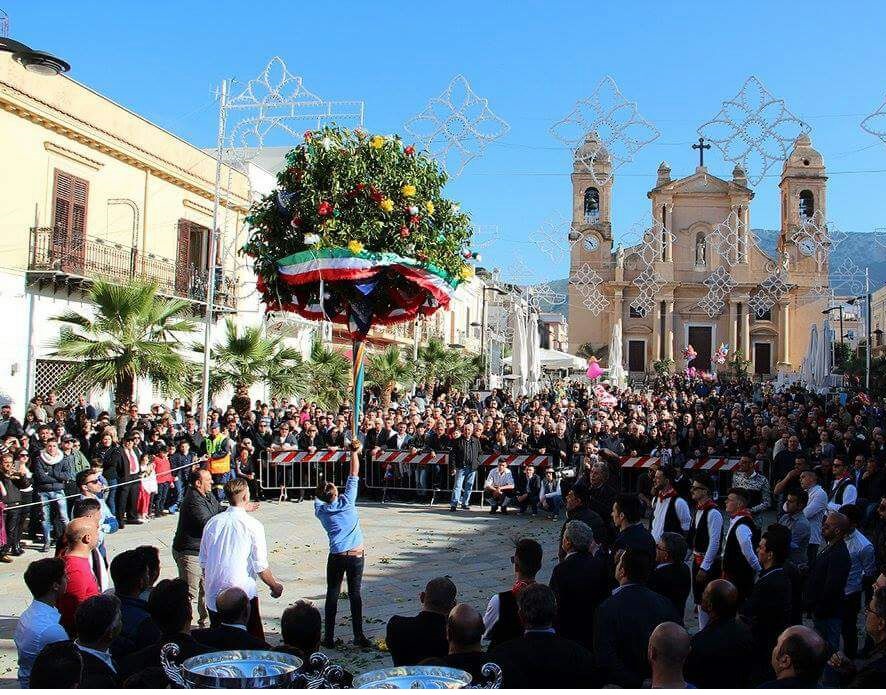 Where once the festival ended an hour of Sunday lunch, today it continues in the afternoon in Piazza Duomo with the intervention of selection boards that will judge the winners, to them that manage to keep up the tree for longer. Characteristic is the clothing of the “young candid” wearing typical costumes: trousers and black velvet waistcoat, white shirt, red scarf, “cheerleader” also red that act as tie and, finally, a red cap.

Really Easter in Sicily is something amazing! Religious, cultural and artistic events, there is something for everyone! And considering the great Sicilian gastronomic tradition, do not forget to taste a piece of Sicilian Cassata which according to many people was created just at Easter time by some nuns at the Convent of the Martorana in Palermo!